Philippe Herreweghe's Harmonia Mundi recordings of Bruckner's 4th, 5th, and 7th symphonies with the Orchestre des Champs Elysées have met a mixed reception. Some reviewers have been downright hostile - e.g. this review of the 4th by David Hurwitz (whose book on Mahler, by the way, I greatly appreciate). After listening to all 3 recordings over the last few days I have a much more positive response. There are real benefits from listening to Bruckner's symphonies with a smaller orchestra - as Herreweghe points out in the booklet accompanying the 7th, the balance of his forces is pretty close to that of the Leipzig Gewandhaus in the 1880s. And the use of period instruments and gut strings adds new timbres and sonorities. He is not a purist about editions, but does leave out the cymbal clash in the Adagio on the 7th (which makes good sense in the context of his overall approach – although including it works well for many other conductors). 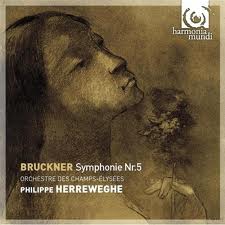 The real strengths of Herreweghe's approach are, first, how the smaller orchestra allows the finer details of Bruckner's orchestration to emerge and, second, his grasp of the verticality of Bruckner's scores. On this second point, and as one might expect from a conductor so steeped in Bach, Herreweghe does wonderful job with the heavily contrapuntal 5th (particularly the fugue and double fugue in the final movement). He typically adopts fairly constant tempi. This generally works well, although the slow movement of the 5th has its longeurs and the overall architecture of some of the longer movements occasionally gets blurred. 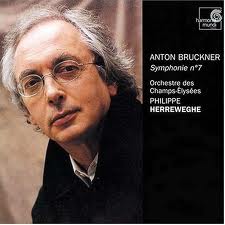 Herreweghe's Bruckner is much more the religious symphonist than the Romantic Wagner enthusiast. There is much to be learnt from listening to him in this light.