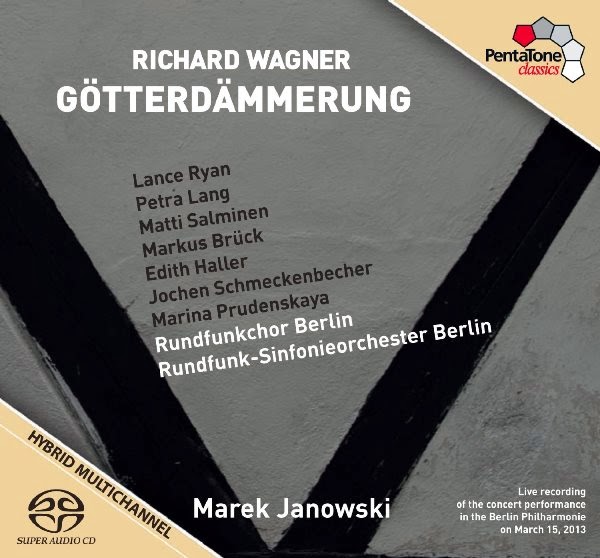 In 1983 Marek Janowski conducted the first all-digital Ring cycle with a strong cast including Theo Adam (Wotan), Rene Kollo (Siegfried), Jeannine Altmeyer (Brunnhilde) and Jesse Norman and Siegfried Jerusalem as the Walsung twins. Now, thirty or so years later, this recording of Götterdammerung closes Janowski’s 3-year traversal in concert performances of Wagner’s major music dramas, all released by Pentatone as SACDs in handsome packaging and with libretti. The 1983 Ring has consistently been well regarded and many Wagnerians recommend it as one of the best studio recordings, particularly since it has been released in a bargain set by Sony. Unfortunately, on the evidence of this concert performance of the final installment of the tetralogy, the new Ring does not come close to the achievements of the 1983 predecessor (which I reviewed here a year or so ago).

The real problem with this new Gotterdämmerung is the singing of the two principals. Lance Ryan is a very disappointing Siegfried. Reputed to be one of the leading heldentenors of the moment and Ryan will be singing Siegfried at Bayreuth this summer. But he certainly seems to have had an off day on March 15, 2013 (when this performance was recorded at the Berlin Philharmonie). He wobbles badly in the very first duet in Act 1 and has real difficulty projecting his personality in Act 2 – it is hard to imagine him imposing his will on the Gibichung vassals. Not until “Brunnhilde, Heilige Braut” in Act 3 do we get a glimpse of what Ryan might be capable of.

Petra Lang seems more naturally a mezzo-soprano, and the role of Brunnhilde is something of a stretch at times. She takes a while to get into the role in Act 1. Clearly out-acted by Marina Prudenskaya’s Waltraute in the Scene 3 duet, she starts to act a little more in the last part of the act when Siegfried reappears as Gunther. She too is weak in Act 2. Things pick up in Act 3. The Immolation scene is much better characterized. But she is still short of the vocal power and expressive range required for the powerful Brunnhilde. Like Ryan she strains at key moments – e.g. when she sends the ravens home to Valhalla.

The other main characters are much better. Matti Salminen’s Hagen is the only constant across the two iterations and he gives a characteristically fine performance. Hagen’s “Hier sitz ich zur Wacht, wahre den hof” is the highlight of Act 1 and the Act 2 duet with Alberich (well sung by Jochen Schmeckenbecher) is very powerful. Markus Brück’s Gunther and Edith Haller’s Gutrune are above average and really carry the main scene in Act 2.

Janowski reveals himself once again to be a first-rate Wagner conductor. His conducting is searching in Siegfried’s Funeral March and finely paced at the finale. The Prelude to Act 2 also stands out. Unfortunately the quality of the singing lets him down and I would find it hard to recommend this set, particularly since it is significantly more expensive than the entire 1983 Janowski Ring.
Posted by José Luis Bermúdez at 7:38 PM No comments: