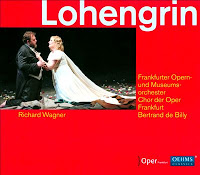 
Frankfurt has been the source for a number of recent Wagner recordings, most prominently the Ring cycle conducted by Sebastian Weigle that was released on CD and subsequently on DVD/Blu Ray (I have reviewed all four dramas in the Frankfurt Ring on this site). This Lohengrin was recorded in March/April 2013, with Bertrand de Billy at the podium. De Billy is the first permanent guest conductor at the Frankfurt Opera and Museum Orchestra. With it Frankfurt Opera consolidates its reputation as one of the world’s Wagner centers, well documented by the Oehms label.


Falk Struckmann’s King Heinrich is probably the best-known soloist here and he does a fine job in a role that is not very challenging from a dramatic point of view. He certainly sets a bar of competence for the rest of the cast, most of whom are far less experienced. By and large they all hit the bar. There is nothing here anywhere near as erratic as, say, Lance Ryan’s Siegfried in the Frankfurt Ring. The standard of acting and characterization is more varied, however.


The female soloists are the most compelling. Camilla Nylund’s Elsa is rather light initially, but she captures her character’s initial vulnerability well. Nylund comes into her own in Act III, where she convincingly implores Lohengrin to reveal his identity before (equally convincingly) reaping the consequences of breaking her pledge.  Michaela Schuster’s Ortrud is also well delineated, masterfully and malevolently sung in Act II. Schuster’s brief appearance in Act III is powerful and effective.


The leading male singers do not reach the same heights. Michael König as Lohengrin and Robert Hayward as Friedrich von Telramund are fine singers. Their set-piece “arias” are perfectly fine, but they both come across as relatively two-dimensional partners in the key duets (between Friedrich and Ortrud in Act II and between Lohengrin and Elsa in Act III). To a certain extent this is a function of their roles – in Lohengrin the female roles are deeper and more interesting than their male counterparts. But others have sung Lohengrin and Friedrich better, despite the limitations of the roles.


The conducting is definitely a highlight in the Frankfurt Ring. The same can be said here. De Billy does a fine job of bringing out the strengths of the Frankfurt Opera orchestra and choir. The danger in Lohengrin, which has so many large-scale set-pieces, is that it can sound like four-square Grand Opera. De Billy does not fall into the trap. His conducting is fluid and maintains good momentum through the choral scenes.


This Lohengrin does not come close to the classic accounts from the 1960’s – e.g. Rudolf Kempe (with Jess Thomas, Dietrich Fischer-Dieskau, Christa Ludwig, and  Elisabeth Grummer) or Wolfgang Sawallisch (with Jess Thomas again, Anjoa Stilja, Astrid Varnay, and Ramon Varnay). But it is a fine modern performance that bears witness to the good work being done in Frankfurt.
Posted by José Luis Bermúdez at 7:49 PM No comments: