Enescu - Complete Works for Solo Piano and Symphony No. 4 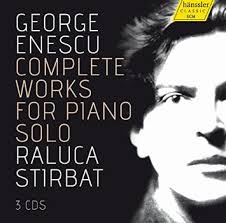 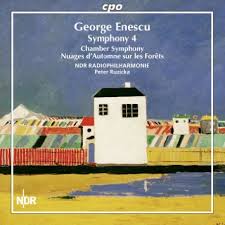 The Romanian composer and musician George Enescu had an extraordinary effect on his musical contemporaries. He was a student at the Paris Conservatoire with Ravel, who described him as “the most skilled among all of us with Gedalge” (who taught composition). Pablo Casals described him as “the greatest musical phenomenon since Mozart”, while Enescu’s student Yehudi Menuhin declared that “Enescu gave me the light that has guided my entire existence”. Nowadays he is a relatively neglected figure, probably best known for his two Romanian Raphsodies, which are perfectly agreeable but probably not what Ravel, Casals, and Menuhin were talking about.

This 3-CD set from Hänssler Classic of Raluca Stirbat playing Enescu’s complete music for solo piano and CPO’s release of the Symphony No. 4 and two other orchestral works will help open eyes to the scope and originality of Enescu’s compositions. It is telling that this is the first ever recording of the Symphony No. 4 (which, admittedly, Enescu left unfinished), and there are a number of other firsts among the solo piano works. Yet, almost all of the pieces reveal a composer with a distinctive voice and innovative approaches to harmony and structure, and some of them deserve a place in the standard twentieth century repertoire.

The principal highlights from these discs are the Symphony No. 4 and the Chamber Symphony. The Symphony No. 4 receives its world première recording from Peter Ruzicka and the NDR Radiophilharmonie. It was sketched out in full by the composer, but only the first of the three movements was completely instrumented. Musicologist Pascal Bertiou completed the instrumentation in 1996. Enescu considered himself to be primarily a symphonist, and this symphony reveals him to as a very fine orchestral colorist with a distinctive harmonic voice and sense of structure. The slow movement is particularly striking, opening with a funeral march on the horn with hand drum accompaniment. The march slowly gives way to fragmented melodies in an exotic harmonic universe, leading to a seamless transition to the final movement – largely sunny in mood, but with flashbacks to the slow movement.

The Chamber Symphony occupies a similar sound world to the opening of the last movement of the Symphony No. 4. It was Enescu’s final work, composed when he was in very poor health. Particularly memorable is the sense of intimate dialog between distinct melodic lines, as well as the funeral march in the third movement. This is a very concentrated and focused work.

The three CDs of Enescu’s piano music are more or less chronologically ordered. Enescu was a noted child prodigy, completing his course of study at the Vienna Conservatory by the age of 14. The works on the first CD were almost all written before his 20th birthday. None of the pieces are masterpieces, but most bear the distinctive stamp of the composer – rhythmically in the A flat major Impromptu (with the unusual time signature of 15/16) and harmonically in the Barcarolle. Enescu’s neo-classical leanings are also prominent. The Op. 3 Suite, written when Enescu was 16, has an impressive neo-Baroque fugue, and the 1903 Prelude and Fugue incorporates a distinctive blend of late Romantic harmonies and expressiveness.

As Enescu’s career progressed his Baroque leanings receded more into the background. Compare the Op. 10 Suite with its predecessor, for example – there are echoes of Debussy and Ravel in the Pavane, and the bell motif plays an important structural role (the piece is subtitled ‘Les Cloches Sonores’). Also on CD2 we have Nocturne, which offers a very good introduction to Enescu’s sound world, and Pièces Impromptus, composed in 1913-1916 but lost until 1957. Two are particularly striking – the haunting and ghostly Mazurk Mélancolique and the shimmering sounds of the Carillon Nocturne.

The principal offerings on CD3 are the two late sonatas. 24 No. 1, dating from 1924, and No. 3, written 11 years later. (Enescu never got beyond the preliminary sketches for No. 2.) The disc opens with the 1912 Sonatensatz, which was the first version of the Allegro from Sonata No. 1. This piece, lost until 1993, has a very late Romantic musical idiom, and sprawls somewhat. The later version in the sonata is much more focused and less generic. It has a pronounced folk element, although not as much as the second movement Presto Vivace, which has very strong and percussive rhythms, or the Andante molto, which sounds like a sort of folk nachtmusik. The Sonata No. 3 is, to my ear, the most completely satisfying of Enenscu’s works for piano. The outer movements combine late Romanticism with Enescu’s Romanian melodies and harmonies, framing a haunting slow movement.

Both of these issues do an invaluable service in bringing Enescu to the attention of a modern audience. Not everything here is gold, but there are certainly some gems. Raluca Stirbat, the distinguished Romanian pianist, is clearly wonderfully well attuned with Enescu’s musical voice. Likewise Peter Ruzicka and the NRD Radiophilharmonie. The sound and recording quality is uniformly high.

Posted by José Luis Bermúdez at 10:00 PM No comments:

Mahler 6 and 7 from Harding and Chailly 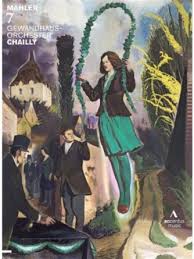 Instead of viewing this music as personal confession – a mirror of autobiographical tragedies, inner turmoil, and anticipated catastrophes – Chailly returns the focus to the music’s purely compositional qualities: the innovative formal complexity, harmonic ambiguity, refined use of instrumental sound, and inexhaustible imagination of Mahler’s symphonic worlds.

A little further on the author (Julia Spinola) says that Chailly takes the music at its word, which “rescues his Mahler interpretations from false pathos and sentimentality” and allows the music “to be experienced as a natural phenomenon, a world quite capable of speaking for itself without the assistance of well-meaning interpreters.” I am sorry to say that this is nonsense of the first order. Music can’t speak for itself. It has to be performed, and any performance that is more than getting the notes right is an interpretation. Chailly is no less of a “well-meaning interpreter” than anyone else.

So – on to the music! Chailly’s interpretation certainly favors lucidity and clarity over high drama and anguish. He is very successful at bringing out Mahler’s superb orchestration and at times the symphony sounds closer to a sinfonia concertante than to a symphony (thanks in part also to some fine and sensitive filming from the team led by Nyika Jancsó). One of Chailly’s great strengths is coordinating an intimate conversation between soloists across the orchestra. This comes across particularly clearly in the Andante Amoroso (the second Nachtmusik).

Chailly’s conducting is not cold, but he does avoid what some would describe as Mahlerian excess (and what others, of course, would describe as the essence of the composer!). Lovers of the kind of approach favored by Bernstein and Solti will be disappointed. Frankly, they may have a point. Take the first movement for example. The three marches have great forward momentum and impulsion, but they lack a certain bite and edge. The first Nachtmusik and the Scherzo are played very revealingly, but without the undertones of menace that I was expecting to hear. Chailly’s night is not “dark and full of terrors”, to borrow a phrase from Game of Thrones.  Still the Rondo-Finale ends with all the affirmation one could want! 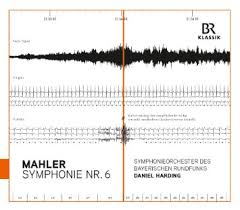 Daniel Harding and the Symphonieorchester des Bayerischen Rundfunks share Chailly’s preference for lucidity and clarity, but their performance is not on balance quite as successful. The best moments in the first movement (to my ear) are in the other-worldly sections in the middle of the movement (the cowbell sections) – some of Mahler’s most contemplative music, played with great sensitivity. But what Harding doesn’t manage to convey is how this section, and the Alma theme, contrast so powerfully with the grim marches that drive the movement.

Harding positions the Andante before the Scherzo (as Mahler himself did for the first three times he conducted it). The movement is played with fluidity and gracefulness, but the Scherzo lacks the element of the grotesque that makes the contrast with the Andante so telling. One characteristic of Harding’s conducting is an apparent unwillingness to commit to strong accents (of the type so beloved of  traditional Mahler conductors), which makes the music sound rather smooth and emotionally understated. The drama comes back a bit with the opening bars of the finale. This movement contains much more emphatic contrast than its predecessors, but it is still missing that element of exaggeration that I think is so important to Mahler – a case in point is the rather flattened entry of the harps after the second hammer blow, which it is hard not to hear as a missed dramatic opportunity.

Both recordings have very fine sound – CD for the Harding recording and a choice between PCM stereo and DTS HD surround sound for the Chailly Blu-Ray (which is also very well-filmed). I think that almost every Mahlerian will want to buy the Chailly performance of the Seventh. I am not so convinced by Harding’s Sixth, however.

Posted by José Luis Bermúdez at 9:46 PM No comments: