Bruckner Symphonies 6 and 9: Simone Young with the Philharmoniker Hamburg 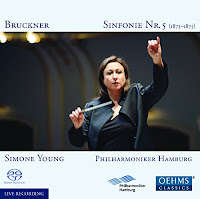 
Here are the last two recordings in Simone Young’s Bruckner cycle with the Philharmoniker Hamburg.  The signature theme of Young’s cycle is using original versions, rather than Bruckner’s later revisions. She did a fine job showcasing the original version of the Eighth – see here for my review. Since the Fifth and Ninth each really only has a single recognized performing version, there are no polemical battles to fight, and it is not surprising, given Young’s predilection for original versions that she eschews any of the completions of the Ninth. However, the flip side of the coin is that with both of these symphonies Young and the Philharmoniker Hamburg have to tackle a wide range of competitors head on and somehow find a way to stand out in a very crowded field. 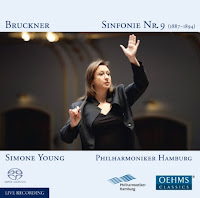 By way of comparison I listened to the Fifth and the Ninth in Stanislaw Skowaczewski’s well-regarded cycle with the Saarbrucken Radio Symphony. This was not a completely arbitrary choice. The Skrowaczewski cycle was reissued this year by Oehms Classics, who also brought us the Young cycle. And, like the Philharmonike Hamburg, the Saarbrucken Radio Symphony is not one of Germany’s most celebrated orchestras, so the comparison is not unfairly loading the bases against Young.


The comparison with Skrowaczewski revealed the principal weakness in these two performances – which is really one of articulation. By “articulation” I mean the ability to bring out the large-scale structure of the individual movements within these two highly complex symphonies. Young’s preference for expansive tempi lets her down, particularly in the opening movement of the Fifth – the Introduction sets things up nicely, but then the pace is too slow to allow the musical narrative to emerge as clearly as it does in Skrowaczewski’s performance, which has a much clearer sense of progression. In the opening movement of the Ninth, Young emphasizes the “flow” of the music, as opposed to bringing out the musical punctuation – again in contrast to Skrowaczewski, who offers a much clearer sense of the steps on a long musical journey.


Young is at her best in those sections where the musical structure is much more clearly imposed by the composer – in, for example, the final section of the opening movement of the Fifth, the fugal passages from the finale of the Fifth, and the two scherzos. But she is less successful when it comes to embedding these sections in a broader context (and, in the case of the two scherzos, in making the contrast with the trios as effective as it can be). She is also more at home in the lyrical passages from the slow movements, where she can coax a rich and satisfying sound from the Hamburg strings.


So, these are definitely not the high points of Young’s cycle. Being able to make a powerful case for lesser known and relatively infrequently recorded original versions doesn’t necessarily carry over to being competitive with versions where we have literally hundreds of recordings to choose from. On the plus side, however, the SACD sound is extremely good and both discs offer a choice between stereo and multichannel audio.

Posted by José Luis Bermúdez at 10:08 AM No comments: