The 3rd Symphony is perhaps the most flawed and certainly the most revised of Bruckner’s symphonies (there are between 3 and 6 versions, depending on how you count). The original 1873 version, disastrously received at its first performance in 1877, was not published until Nowak’s 1977 edition, which based on Wagner’s fair copy of the score that had been dedicated to him. There has been more of a vogue recently for performing this original version (see, e.g., Norrington’s recording, which I reviewed here), but Kurt Sanderling here follows the majority in performing the 1889 revision, edited by Nowak in 1959. 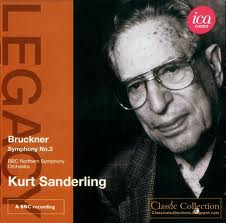 Robert Simpson is not an enthusiast for the 3rd Symphony, which he describes in his wonderful book The Essence of Bruckner as “the weakest of Bruckner’s numbered symphonies”. Simpson’s objections are primarily structural, and it is true that performances of the 3rd typically fail to bring out a compelling architecture.

It is to Sanderling’s credit, though, that this performance does communicate a musical inner logic. In the first movement Sanderling’s steady tempi are key, as his disinclination to luxuriate in Bruckner’s more bombastic moments. The Adagio has more weight, but remains in balance with the first movement. Sanderling and the BBC  Northern Symphony (soon to be renamed the BBC Philharmonic) bring out the lyrical depths of the movement, with steady tempi once again. The juxtaposition of the Scherzo and the Trio is very effective, and sets things up nicely for the split personality of the finale, with a funereal chorale and a sprightly polka running through it (and combined in the famous “double theme”).

All in all this is a fine performance, which makes a good case for the 1889 revision, despite the by and large justified criticisms of Simpson and others. Sanderling is a fine Brucknerian (see here for a review of his December 1999 Stuttgart 7th). It is unfortunate that the included 10 minute interview by Piers Burton-Page does not touch upon Bruckner. The exchange is interesting nonetheless. If there is a fault, it is in the rather dry acoustics of the Newcastle City Hall, but the ear should soon adjust. Recommended.

Posted by José Luis Bermúdez at 9:33 PM No comments: