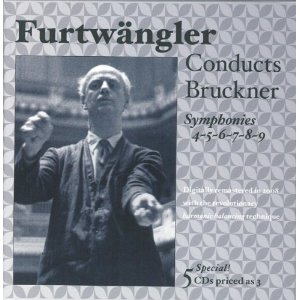 In many ways Furtwängler is the ideal Bruckner conductor. There is the extraordinary sense of large-scale architecture that made him such a wonderful Wagnerian. Not to mention his ability to penetrate to the emotional depths of Bruckner’s adagios, and to build and sustain momentum as the composer moves slowly, massively, and inexorably to his great climaxes (in, for example, the slow movements of the 7th and 8th, and the finale of the 5th).

All of these qualities are on display in this collection of live recordings, all but 2 from wartime performances. These performances have all been available over the years on various labels with differing levels of sound quality. The transfers here are first-rate and Music and Arts are to be thanked for gathering these materials in a relatively inexpensive set (5 CDs priced as 3, it proclaims on the box). The issue contains a useful leaflet with extracts from John Ardoin’s 1994 book The Furtwängler Sound corrected in some cases by detailed notes from the sound engineer (Aaron Z. Snyder) on the editions Furtwängler used.

All of the symphonies are complete, with the exception of the 6th, for which the first movement was not preserved. The core of the symphony is the second movement Adagio, surely one of Bruckner’s finest, and Furtwängler’s performance of this movement with the Berlin Philharmonic is one of the highlights of this set. It is hard to believe that 1943 was his first year conducting the symphony.

The Berlin Philharmonic plays 3 of the other 5 symphonies, with the Vienna Philharmonic playing the 4th and 8th. I am not a purist about Bruckner versions, but I do have an aversion to the Löwe-Schalk version of the 4th (which Furtwängler played in the Stuttgart concert recorded here). Debates about whether or not it was officially sanctioned by Bruckner seem to me to be beside the point. It just doesn’t sound right. Can I be the only person who has got up to answer the doorbell on hearing the extraneous percussion in the opening movement?

The 8th is played in a modified version of the Haas edition. Furtwängler’s modifications do not intrude and the performance as a whole is magnificent, with the first 3 movements all building up to the Archimedean climax of the Adagio, whose energy is slowly dissolved in the coda. Furtwängler carries Bruckner’s greatest and most complex finale with a sure grasp of both journey and destination.

Another highlight is an incandescent recording (from October 1942) of the 5th. Furtwängler takes this symphony, one of Bruckner’s most forbidding and structurally complex, at a phenomenal pace and white-hot levels of intensity. I know of no other performance that maintains a comparable momentum through the fugues in the finale.

The most disappointing performance here (leaving aside the 4th) is the April 1951 Cairo 7th . But disappointment is a relative concept when it comes to Furtwängler’s Bruckner performances. It would probably be better to describe it as the least spell-binding performance in this indispensable testament to the magical combination of Furtwängler and Bruckner.
Posted by José Luis Bermúdez at 8:22 PM No comments: