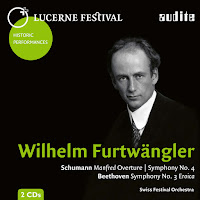 This 2-disc release from Audite of a live performance from the 1953 Lucerne festival is obviously a real treat for Furtwängler fans. But it is not just of historical interest. The sound quality is good enough that it should appeal to anyone interested in outstanding performances of two great symphonies, as well as of Schumann’s Manfred Overture (here released for the first time).

The Schumann and Beethoven symphonies have been issued many different times before, but typically in private recordings made from the radio broadcasts. At best, the sound quality has been acceptable for enthusiasts. This release, however, is based on a remastering of the original tapes rediscovered in the archives of Schweizer Radio und Fernsehen (SRF). The result is extraordinarily good (both when played in a SACD player and on an ordinary CD player). The acoustic clarity of the Eroica recording compares well with Furtwängler’s studio recording for EMI of the same symphony with the Vienna Philharmonic (admittedly recorded nearly a decade earlier in 1944).

All three pieces are played with Furtwängler’s characteristic intensity and depth. The two works by Schumann bring out both poles of the composer’s complex character, as personified in his two personae, the extroverted, boisterous Florestan, and the introverted Eusebio. And it is hard to imagine a better performance of the Eroica, particularly the Funeral March. This is a must-buy disc for anyone seriously interested in the Romantic symphony.

Posted by José Luis Bermúdez at 9:01 PM No comments: