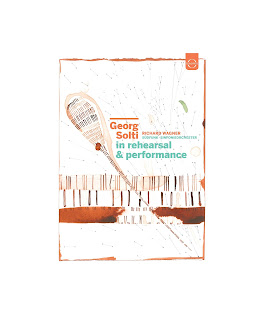 
This is the latest DVD in EuroArts series of archive recordings of eminent conductors in rehearsal and performance. Previous issues include Erich Leinsdorf, Herbert von Karajan, Carlos Kleiber, and Sergiu Celibidache. The Solti recording captured here dates from  a concert in1966 (no further details are available either in the liner notes or on the website), a year after Solti finished his celebrated recording of Das Ring des Nibelungen with the Vienna Philharmonic. The orchestra is the Südfunk-Sinfonieorchester, a fine orchestra better known now under its current name of the Stuttgart Radio Symphony Orchestra.

Compared to other issues in the series the offering here is a little sparse. We are given two rehearsals, totaling just over 40 minutes, and a 17 minute performance. The Karajan DVD, in contrast, offers rehearsals and performances of Schumann’s Symphony No. 4 and Beethoven’s Symphony No. 4. It runs for 2 hours 20 minutes with over 90 minutes of rehearsal time. An earlier DVD issue (from Arthaus in 2003) also included the Hungarian march from Berlioz’s Damnation de Faust. Still, one advantage of focusing on a relatively short work is that we are able to hear and watch almost every bar being rehearsed.

The key word here is ‘rehearsed”, as opposed to ‘played in rehearsal’. Solti lives up to his reputation for perfectionism and attention to detail. He gets to work without much idle chat and works methodically through the piece, frequently stopping to work with individual sections and individual musicians. Solti places enormous emphasis on the musicality of the overture and the quality of the sound (to the point of asking the percussion to stand before their entry). His knowledge of the entire work is very deep and he often explains how he wants a section or instrument to sound with reference to how the thematic material is developed later on in the opera – e.g. to the clarinetist playing the Venus theme.

I was curious to observe the dynamics between conductor and ensemble, given Solti’s well-known and well-documented reputation as a martinet – as the booklet remarks, he was known at the Royal Opera House as Georg the Terrible and the Prussian (ironic really, for a Hungarian Jew who spent the war years in exile in Switzerland). Of course he may have been on his best behavior in front of the TV cameras, but the Solti that emerges here is very respectful of the players and (almost) as free with his praise as his criticism. Instructions are given politely and it is quite plainly just about the music. The impression that I came away with was of rigor not ferocity.

For those of us who rarely if ever see the work that goes into a performance it is salutary to be reminded of the depth of thought and preparation (and also rather humbling, particularly for a reviewer). The actual performance is marvelous and having seen the rehearsal in advance helps the listener pick out subtle details they might otherwise have missed. The audio and video quality are extremely good for the date and the booklet includes a nice biographical sketch. This is well worth a look, for Wagnerians, Solti enthusiasts, and anyone who appreciates fine conducting.

Posted by José Luis Bermúdez at 9:18 AM No comments: