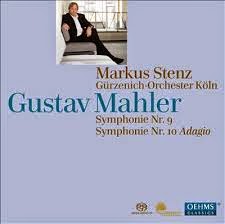 Here are two new recordings of Mahler’s Ninth, one on hybrid SACD and one on Blu Ray (also available as a DVD). With this recording, Markus Stenz brings his cycle of Mahler symphonies with the Gürzenich-Orcherster in Cologne to a close – and also his career with the orchestra, as he moved this summer to the Netherlands Radio Philharmonic. All of the recordings in Stenz’s cycle are studio recordings, although based on concert hall performances. This is the sixth Mahler symphony that Riccardo Chailly has conducted for Accentus with the Leipzig Gewandhaus (already available are Nos. 2, 4, 5, 6, and 8). All of these recordings come from live performances at the Gewandhaus zu Leipzig.


Stenz’s interpretation of the Ninth is towards the restrained end of the spectrum, with a valedictory tone throughout. The Gürzenich-Orchester is not one of Europe’s best-known orchestras, but it has a fine Mahler pedigree (having given the world première of the Fifth on October 18, 1904, with Mahler himself at the podium). Under Stenz’s direction the players find a fine singing line in the first movement, which is brought to a haunting close with fine playing in the piccolo and strings. The second movement Ländler does indeed dance – the grotesque and ironic dimension is there, but not foregrounded. There is a similar restraint in the Rondo-Burlesque, where the cantabile middle section effectively contrasts with the two outer sections, particularly the brutal last few minutes. Stenz’s understated approach to the first three movements throws the spotlight on the final Adagio, one of Mahler’s greatest movements, perhaps the greatest. Stenz and the Gürzenich-Orchester deliver a very powerful rendition that is deeply elegiac.


Chailly’s approach to the Ninth is rather different. The bonus item for the disc is a 15 minute conversation between the conductor and the celebrated Mahler biographer and musicologist Henry-Louis de la Grange (now 90 years of age and still a very acute commentator). In the conversation Chailly stresses how full of life and strength the Ninth is. Much of the music, particularly in the finale, is music of farewell, but it is not the music of Mahler himself bidding farewell. In line with this basic insight, Chailly brings out the contrasts much more than Stenz. The first movement is significantly more dramatic and the macabre side of the scherzo is more pronounced, becoming ferocious towards the end. Chailly attackes the Rondo-Burlesque from the opening, so much so that the contrast with the cantabile section is quite jarring. All of this leads up to a truly magnificent finale, with drama and depth culminating in an other-wordly ending. The hush in the Gewandhaus at the movement’s close says it all.


The Stenz recording is good and certainly to be recommended. It includes a fine performance of the Adagio of the Tenth from 2011.  But it suffers by comparison with the Chailly performance, which is truly exceptional and one of the finest issues so far in 2014, with fine cinematography and excellent sound quality.
Posted by José Luis Bermúdez at 8:05 AM No comments: