Siegfried on DVD from the Frankfurt Opera 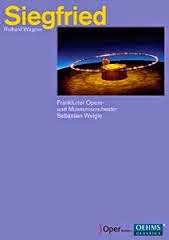 With this issue Oehms has now released in DVD three of the four dramas in the 2012 Frankfurt Ring cycle conducted by Sebastian Weigle and directed by Vera Nemirova. This new set follows on from an earlier (2010) CD issue of the same production with a very similar cast. I was very impressed by Das Rheingold and positive also about Die Walküre, although the overall impact of the latter was marred by some shaky singing.

I had some trepidation about Siegfried, both because Susan Bullock’s Brunnhilde was one of the low points of Die Walküre and because I have never really warmed to Lance Ryan as a heldentenor. In the event, though, I was happier than I expected to be. Bullock was much more impressive than in Die Walküre and Ryan rose to the occasion. To my ear the finest singing came from Terje Stensvold as Wotan/Die Wanderer and Jochen Schmeckenbecher as Alberich. But the real star was Sebastian Weigle in the orchestra pit, who shaped a performance that ends up much greater than the sum of its parts.

The signature device of Nemirova’s staging (a large rotating disc, itself made up of concentric rings that can move independently in three dimensions) continues to govern the production. The disc rises to create space for Mime’s hut and Fafner’s cave and a clever use of lighting keeps the sets visually interesting and relevant (the red lighting for Fafner’s cave is particularly effective). The only addition to the rings comes in the scene with Erda, who appears to have been enjoying her primeval sleep sitting upright in a large aquarium. It does look better than it sounds, however.

The aspect of the production that seemed least successful to me was the costumes (designed by Ingeborg Bernerth). I can just about live with Fafner bedecked in red paint and beads, since it’s pretty tough to do dragons. But Erda looked for all the world like an enormous hairy Afghan dog (lacking the characteristic elegance of the breed), which didn’t do her any favors and distracted from some rather good singing, particularly in the lower register. Siegfried and Brunnhilde were both rather traditionally attired in pseudo-medieval outfits. Not so the wild bird, sung off-stage by Robin Johannsen (rather well, as it happens) and represented on-stage by a ballet dancer in a dark skin suit with feathered extensions instead of fingers. That didn’t work for me, I’m afraid.

Terje Stensvold was a longterm regular at the Norwegian National Opera from 1972 to 1999 before launching an international career that has seen him singing Wotan in Stockholm, Frankfurt, and Melbourne. He is the real find of this production and has developed the role very convincingly over the first three dramas – from the braggart empire-builder in Das Rheingold to the weary but wiser Wanderer who has learnt to accept the inevitable demise of the Gods. The complexity of the character comes out particularly well in the encounter with Alberich (Jochen Schmeckenbecher) at the beginning of Act 2. Schmeckenbecher also develops his character with depth and insight. The same cannot quite be said for his brother Mime (sung by Peter Marsh), who manages successfully to capture on occasion Mime’s simultaneous ingratiatingness and malevolence, but who also lapses on more than one occasion into caricature.

Brunnhilde (Susan Bullock) has fewer problems projecting than she had in Die Walküre, where she sounded painfully strained on occasion. But she still appeared to be having difficulties keeping up with Lance Ryan, even though he has been singing for several hours before she wakes up in Act 3. Her strengths are in the more thoughtful and reflective parts of the role (the dialogs with Siegmund and Wotan, for example) and the long duet with Siegfried does not fall into that category – certainly not when large parts of it are sung, as they are here, by the two protagonists standing side by side to address the audience. Ryan sings very naturally in his confrontation with Wotan. He occasionally over-sings in the first two acts, but overall he is a more than credible Siegfried.

Sebastian Weigle’s conducting is becoming more impressive with each part of the Ring. He has a very fine sense of pacing, both within the individual scenes and across the entire drama – as well as the ability to articulate the vertical structure of the music clearly and to integrate it with the voices. Under his direction the Frankfurt Opera is revealing itself to be in the front rank of Wagner orchestras. I am looking forward to Die Götterdämmerung.
Posted by José Luis Bermúdez at 6:25 PM No comments: