Thielemann's Bruckner 1 and 3 on Blu-ray 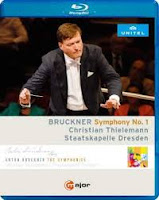 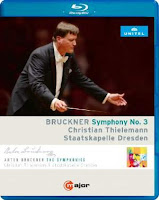 The recording of Symphony No. 1, from a performance at the Philharmonie Munich on September 6, 2017, is actually the first recording of the 1968 Linz version, as edited by Thomas Röder in 2016. This is a lightly revised version of Bruckner’s original 1866 score, prepared for the symphony’s first public performance, and so it offers a chance to hear the symphony as it was heard by a doubtless bemused audience in Linz on May 5, 1868 – the first public performance of any of Bruckner’s symphonies. (The original 1866 score, prepared by William Carragan, has been recorded by Georg Tintner and Gerd Schaller, and differs only slightly from this version.)

The First may be the least known of Bruckner’s symphonies, but it is certainly not a piece of juvenilia (quite apart from the fact that Bruckner was 42 when he composed it). Bruckner’s harmonic innovation is on full display. There are sustained dissonances, particularly in the Finale, and some of what subsequently became Bruckner’s characteristic devices, such as sudden stop in mid-movement. Thielemann and the Staatskapelle bring out the weightiness of the piece (while doing justice to the fine part-writing, particularly for wind).

The Symphony No. 3 is played here in the 1877 version (Nowak edition). Thielemann makes a strong case for this symphony, which has often been maligned (most famously by Robert Simpson). It is more rough-hewn than the later masterpieces, but in the right hands that can be translated into dynamism and energy. This is perhaps the first of Bruckner’s truly heroic symphonies and this performance does not hold back, coming to a triumphant conclusion in the coda of the finale that is met with rapturous applause by the audience in the Philharmonie Munich.

As with all the discs so far in this Bruckner cycle, the production values are first-rate. The two videographers (Andreas Morell for No. 1 and Elisabeth Malzer for No. 3) use the cameras to good effect to shed light on Bruckner’s orchestration (although I wish they would pan out a little less). The sound quality is excellent – I listened in PCM stereo, but DTS-HD 5.0 surround sound is also an option. My only minor quibble is with the liner notes, which are rather sketchy (the notes for No. 1 do not distinguish between the “real” Linz version recorded here and the subsequent 1877 revision more often described as the Linz version, despite being prepared in Vienna). But this is a minor blemish on two discs that live up to the high standards of this impressive Bruckner cycle.